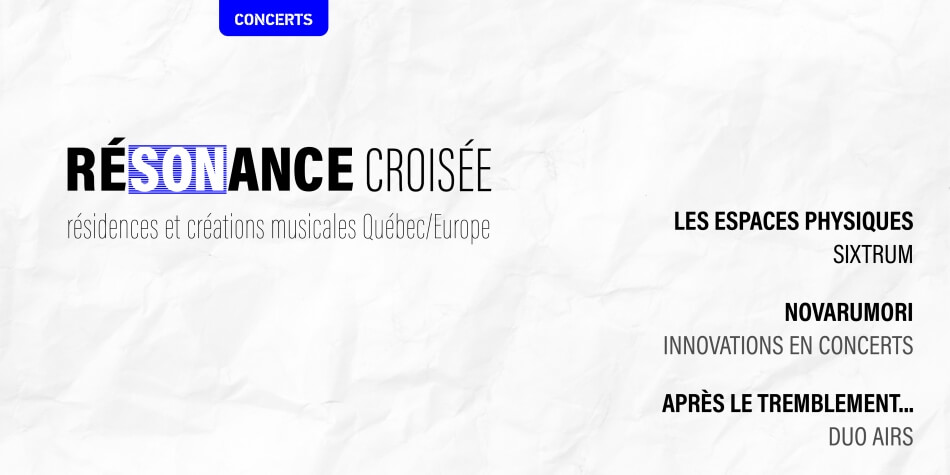 Created and presented by Le Vivier, with the support and collaboration of the European Union Network of National Cultural Institutes (EUNIC).

Résonance croisée is the concretization of residencies and musical creations crossed that allow Quebec and European performers and composers to meet and work together. The event proposes to put into perspective different approaches to today's music. Thus, three concerts in October (part 1) will bring together 13 works, including five premieres from Quebec and Europe, and in April, seven concerts will be presented (part 2). Alongside these two series of concerts, inter-university meetings will bring together students from the Hochschule of Dresden, the Pôle Supérieur of Boulogne Billancourt and the Vivier InterUniversitaire (VIU) for five online master classes linked to the programme, in the presence of the composers Carmine Emanuele Cella, Jean-Luc Hervé, Mark Andre, Séverine Ballon, Paul Hauptmeier and Martin Recker.

This exceptional event, in which seven countries (France, Italy, Germany, Spain, Switzerland, Austria and Quebec/Canada) are represented, is not an individual event, but a network of expression and mutual listening by artists and creators.

The Sixtrum concert will present the premiere of the triptych Inside-out by Italian composer Carmine Emanuele Cella, which offers a new listening paradigm in which the immersive properties of space are integrated with the instruments. The composer uses new technologies and artificial intelligence algorithms to create augmented percussion instruments.

The Novarumori concert will feature two Canadian pieces, one by Émilie Girard Charest, and the other, a creation by James O'Callaghan (Can), two artists of the younger generation. Two pieces for solo cello will punctuate the programme, one by the composer Mark Andre and the other by Jean-Luc Hervé, both of whom are teachers of the two Franco-German university groups.

The Duo AIRS concert will honor the crossing of generations and cultures by presenting a repertoire for saxophone, percussion, electronics and video by composers Laurent Durupt and Bruno Letort, and the composer Nùria Gimenez Coma, whose creation specially conceived for the event will be performed as a world premiere.

Cross-resonance is a co-production of Le Vivier and the Montreal cluster of cultural institutes of the European Union member states EUNIC (European National Institutes for Culture).