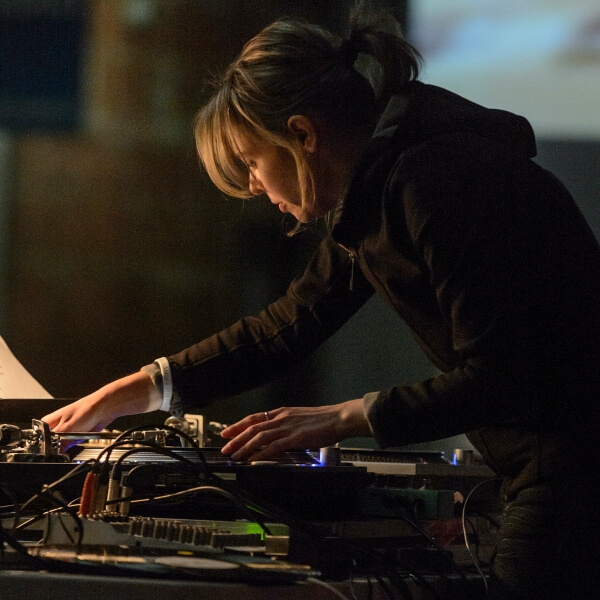 Called a “brilliant musical scientist” and lauded for “creating a stir with listeners for her breathless imagination and ability to capture Gen-X and beyond generation”, Montréal based composer Nicole Lizée creates new music from an eclectic mix of influences including the earliest MTV videos, turntablism, rave culture, Hitchcock, Kubrick, 1960s psychedelia and 1960s modernism. She is fascinated by the glitches made by outmoded and well-worn technology and captures these glitches, notates them and integrates them into live performance.

Nicole Lizée’s compositions range from works for orchestra and solo turntablist featuring DJ techniques fully notated and integrated into a concert music setting, to other unorthodox instrument combinations that include the Atari 2600 video game console, omnichords, stylophones, Simon, and karaoke tapes. In the broad scope of her evolving œuvre she explores such themes as malfunction, reviving the obsolete, and the harnessing of imperfection and glitch to create a new kind of precision.

Nicole Lizée was recently awarded the prestigious 2013 Canada Council for the Arts Jules Léger Prize for New Chamber Music. She is a Civitella Ranieri Foundation Fellow (New York City/Italy). This Will Not Be Televised, her seminal piece for chamber ensemble and turntables, was selected for the 2008 UNESCO International Rostrum of Composers’ Top 10 Works. Her work for piano and notated glitch, Hitchcock Études, was chosen by the International Society for Contemporary Music to be featured at the 2014 World Music Days in Wroclaw, Poland. Additional awards and nominations include a Prix Opus (2013), two Prix collégien de musique contemporaine, (2012, ’13) and the 2002 Canada Council for the Arts Robert Fleming Prize for achievements in composition.