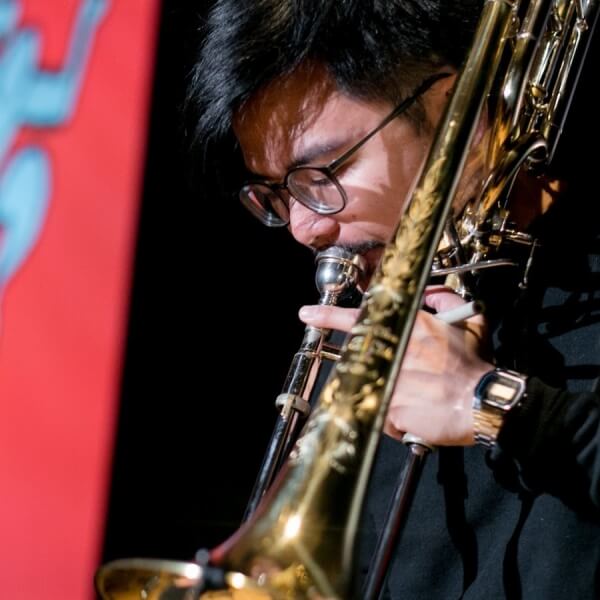 Kalun Leung is a trombonist, improvisor, composer and creative technologist based in Brooklyn, New York. His work as an instrumentalist is motivated by the exploration of new and unexpected contexts in which the trombone can thrive. This ongoing research-based approach has manifested in travels to the Guča, the capital of Serbian brass band music, audiovisual performances of Keith Haring’s unpublished computer art, a Fluxus-inspired trombone sound sculpture, ecoacoustic improvisations on what was the largest landfill in the world, and the creation of mubone, a custom electronically-augmented trombone.

Kalun’s musical training began on the violin at the age of 5 in Toronto, Canada. At age 8, he was selected to attend a performing arts school where he received a fundamental education in drama, dance, visual arts, and music. He began studying jazz and classical trombone in middle school, choosing the instrument because of its peculiar telescopic slide. After a short career in marketing, he enrolled in McGill University where he completed his Masters of Music under the tutelage of Patrice Richer. He moved to New York City in 2016 to study at The New School with the avant-garde’s foremost trombonist David Taylor and formed the experimental trombone quartet So Wrong It’s Right with Taylor upon graduating.

In his final semester at The New School, he studied the 1960s art movement Fluxus with Anthony Coleman and was inspired to create his own intermedia works such as Die Posaune, Twisted Twister, and the BF+DA Interactive Cocoon, an e-textile musical cloak which was created in collaboration at the Brooklyn Fashion + Design Accelerator where he was a Research Fellow. Continuing his exploration of fusing art and technology, he was awarded the Marin Alsop Entrepreneurship Grant in 2018 to create a prototype for mubone, a traditional trombone outfitted with electronic orientation sensors and controls. The project consists of custom hardware and software, and the development of a new performance practice based on movement, space, and time with the goal of fostering oblique compositional strategies through spatial improvisation.

His work in using embedded electronics with instrumentalists led him to be invited as a composer-in-residence at New York University and a commission from Seed Artists to create an interactive speaker woofer instrument-installation in 2019. He is currently prototyping a new speaker-plunger mute for the trombone at Harvestworks where he is a 2019 artist-in-resident. In 2017, he was an Artist in Residence at the Teatro del Lago in Chile and taught masterclasses at The Baccarelli Institute of São Paulo.

Kalun became affiliated with the Creative Music Studio under the encouragement of his mentor Billy Martin and has had the opportunity to work alongside Downtown and improvised music masters Karl Berger, Steven Bernstein, Billy Martin and Ken Filiano as part of the CMS Improvisor’s Orchestra. He is a member of the movement and sound improvisation collective ECHOensemble, Eco-Music Big Band, and has a solo project that explores the trombone through the lens of object theatre and mime.

His yearning for non-Western folk music was influenced by the folk pop outfit Little Suns which he has toured and recorded with since 2013. This led him to discover and perform traditional and folk-inspired music from around the world as a member of Zlatne Uste, people.of.earth, and the Orchestra of the Americas, and having performed with Banda de los Muertos, Nation Beat, Slavic Soul Party and members of the Bulgarian National Folklore Ensemble.

During his time in Montréal, Kalun led the Salsa Montréal Collective and Trubači McGill, the latter which earned him the Canada Graduate Scholarship (SSHRC). In 2017, he was awarded the Exemplary Service to the Community and State by the New York State Senate.