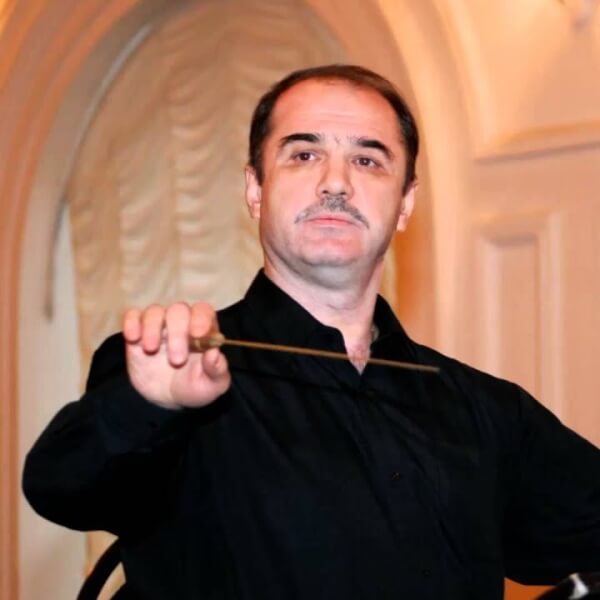 Evgeny Shcherbakov, Russian-Canadian composer, conductor and educator, was born on the 18th of July 1958, in Gorky (now Nizhny Novgorod), Russia.

At the age of eight, he started as a brass band player and already at nine, he mastered several musical instruments of a brass band and created his first piece, "Minutes" for piano, which is still performed in Russia, Europe and Canada today. At the same time, the first experience as a conductor was acquired, Evgeny conducted the orchestra at the concert. This moment was the source of inspiration which marked the beginnin of a life-long career in music. Later he played in the accordion orchestra under the direction of A. A. Kanatov, the orchestra, which was famous for its high performing mastery of the symphonic repertoire.

From his youth up, Shcherbakov’s style has been grounded in the Russian Orthodox Religious traditions and influenced with the thinking of Russia's great philosophers, which the composer interprets through a prism of contemporaneity and contemporary composer techniques.

From 1990 to 2008, Shcherbakov was a Professor of Composition and Orchestration at the Nizhny Novgorod State Glinka Conservatoire and an associate conductor of the Conservatoire's Symphony Orchestra training highly-skilled specialists and touring widely as a composer, conductor and lecturer. During that period, he performed many world-premieres of works by contemporary composers including his own pieces. Many of his students took part in all-Russian as well as international competitions of composers and were recipients of many prizes and diplomas.

Over the years, Shcherbakov has composed numerous works ranging from children’s music and chamber music to symphonies, instrumental concertos, cantatas and oratories. Many of these have been repeatedly performed in Switzerland, Germany, Russia, Ukraine, Macedonia, France, Belgium and Canada. His professional portfolio also includes a wide variety of arrangements and instrumentations.

He’s been nationally and internationally commissioned and awarded international residences and grants in Switzerland (Basel, 2000; St. Moritz, 2004; St. Moritz, 2005; Dornach, 2007) and in Canada (2015, 2017, 2018, 2019, 2020) as support to pursue his creative skills in music. In 2008, Shcherbakov won the “Saint Symbols of Russia”, an all-Russian competition of composers (Samara). In 2010, he was awarded special composer and choir prizes at the Vancouver International Festival of Russian Music.

In 2008, Shcherbakov immigrated with his family to Vancouver, Canada as composer, conductor and University professor and continued to compose and tour as composer, conductor and pianist. From 2008 to 2018, he was choir director at the Vancouver Waldorf High School Choir; since 2008 till present, Shcherbakov is professor of Music Departament and pianist, Dance/Eurythmy accompanist at the Vancouver Waldorf High School; from 2008 to 2011-choir director at the Old Barn Community Centre Choir, UBC, Vancouver; from 2012 to 2015-choir director at the Waldorf Community Choir. In 2009, being a long term member of the Union of Composers of Russia, he became an Associate Composer of the Canadian Music Centre and a Professional Member of the Canadian League of Composers.