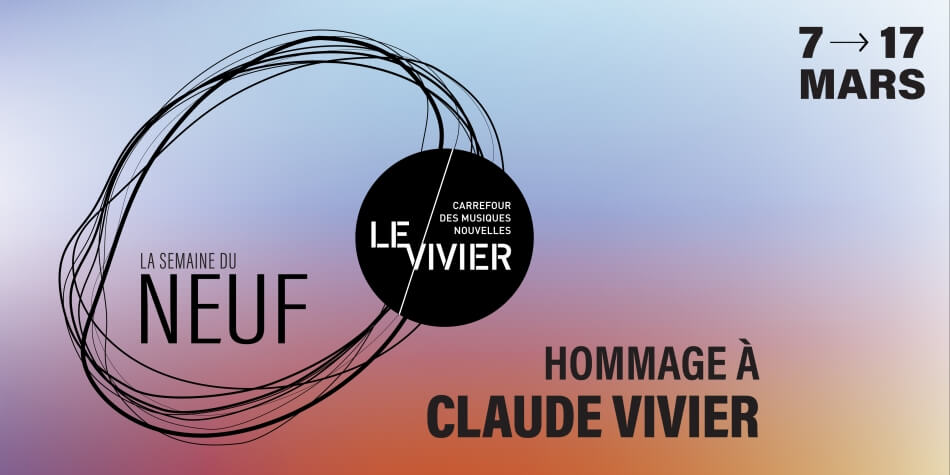 Montreal, January 19, 2023 - Le Vivier is proud to announce the first edition of La Semaine du Neuf, which this year will pay tribute to Quebec composer Claude Vivier, from March 7 to 17, 2023 in Montreal. This event will celebrate in music and unique encounters the repertoire and life of this internationally renowned composer, who has left a lasting mark on contemporary music creation.

La Semaine du Neuf is a nod to the "Événements du neuf" imagined by Claude Vivier and other great figures of Montreal's contemporary music scene: Lorraine Vaillancourt, the late José Evangelista and John Rea. Every ninth of the month at nine o'clock in the evening, this event dedicated to new music was held with the mandate to explore the different trends of contemporary music in all its forms, including multimedia performances, while aiming to decompartmentalize genres and periods. This year, Le Vivier proposes to revive this tradition by paying tribute to the man who is considered today as the greatest Quebec composer: Claude Vivier.

Claude Vivier has deeply marked the landscape of musical creation and represents a major reference for many current composers. Forty years after his death, Le Vivier pays tribute to him for ten days with concerts, multidisciplinary shows, projections, but also unique moments of meetings and discussions with the public to discover the bewitching and jubilant universe of the composer Claude Vivier. To interpret, sing, dance and especially celebrate his legacy, national and international guests will be joining us!

Conductor, friend and collaborator of Claude Vivier, Lorraine Vaillancourt will honor us with the opening concert of La Semaine du Neuf (March 7). Guest Flemish soprano Katrien Baerts and the Nouvel Ensemble Moderne (NEM) will perform some of the finest works from the last period of the composer's repertoire, as well as a tribute piece by Serbian composer Marko Nikodijevic.

The tribute week continues with the Breault-Reimer Duo (Marie-Hélène Breault and Pamela Reimer) in MES HOMMAGES II (March 8). The duo offers arrangements for flute and piano of some of the founding members' works of the “Événements du neuf”: Claude Vivier, John Rea, and the recently deceased José Evangelista. A program that will allow us to appreciate the creativity, virtuosity, and complicity of the performers!

Pamela Reimer and the percussion ensemble Sixtrum will alternate arranged pieces to blur the boundaries between piano and percussion in PIANO / PERCUSSION (March 16). Ligeti's piano studies will be the highlight of this performance.

"The future of music cannot be seen without the essential contribution of other cultures. The human spirit can only be cosmic when it brings into play its entire cultural heritage", prescribed Claude Vivier.

In a unique evening, in collaboration with the The International Festival of Films on Art (Le FIFA), the vocal collective Phth presents a daring cinematic version of LOVE SONGS (March 15). This Vivier commission will celebrate multiple identities, where androgyny, gender ambiguity and free sexuality reveal the mutations of the contemporary world. A queer side very much assumed by the composer of the last century as well as by the interpreters of today! An evening that will be enriched by the projection of a mono-opera LIGHT by Jimmie Leblanc on a text by the montreal writer Klara Du Plessis.

The new music presenter will close the festivities of La Semaine du Neuf with Paramirabo's PROLIFÉRATION concert (March 17) with a program combining works by Claude Vivier and two of his teachers who greatly influenced him: Karlheinz Stockhausen and Gilles Tremblay.

A new must-attend event to add to your calendar which promises to bring something new!

"Vivier is the opposite of romanticism. It is the non-human becoming, the becoming world - the becoming universe, if you like: the stars, cosmic loves." Robert Richard