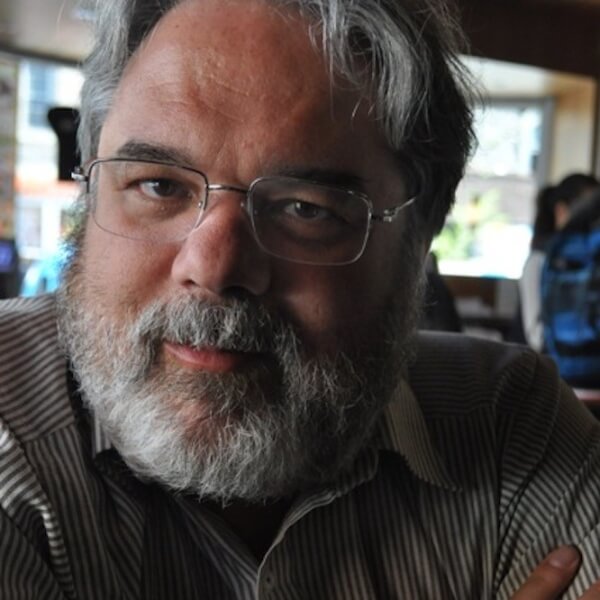 Sandeep Bhagwati was born in Bombay in 1963 and is a composer, poet, multimedia artist, festival director, publicist and researcher.

His multi-media concert installations, his music theatre works (among them three operas), orchestra and ensemble compositions, his chamber music and comprovisation scores are performed worldwide at leading festivals and venues, too numerous to list here. In 2014, the “Time of Music Festival” in Viitasaari, Finland showed a retrospective of his works. In 1991, he won the European Composition Prize awarded by the Academy of Arts Berlin, and in 1997 and 2003 the Ernst-von Siemens award for festivals he founded, the A•Devantgarde Festival in Munich (active since 1991), and the KlangRiffe Festival in Karlsruhe (2003). He has been composer-in-residence at the Beethoven Orchestra Bonn, the Darmstadt Initiative for New Music and Education, the Turku Music Academy, and the California Institute for the Arts.

He has also curated a long-term collaborative project between prominent musicians of the Hindustani tradition and the Ensemble Modern Frankfurt, and has toured with it to Concertgebouw Amsterdam, Venice Biennial, HKW Berlin, World New Music Festival Stuttgart and the National Center for the Performing Arts in Mumbai.

While in Germany, he published many articles on new music and the arts in quality weeklies and dailies such as Süddeutsche Zeitung, Die Zeit, Neue Zürcher Zeitung, and wrote a large number of radio features and radio plays for German public radio stations.

After studies at the Mozarteum Salzburg, Music University of Munich and the IRCAM Paris, he freelanced for a decade before he accepted a position as professor of composition at Karlsruhe Music University (Germany). From there he moved to Montréal as the Canada Research Chair for Inter-X Arts and founded matralab, a node for research-creation in the performing arts he directs at Concordia University since 2007. He was a guest and visiting professor at Heidelberg University, University for the Arts Berlin, Flame University Pune and has lectured and taught master-classes at many universities and conservatories worldwide. His academic work is published with academic publishers such as Springer, Routledge, Delatour and Schott.

His current research focus lies on generative and tactile and audio scores for moving musicians, on artificial intelligence driven comprovisation software, on inter- and trans-traditional musicking, and on new presentation formats for digitally informed performance-creation.

After many creative collaborations with traditional musicians around the world he has founded and directs three ensembles of trans-traditional new music in Berlin (Ensemble Extrakte), Montréal (Ecstasie of Influence) and Pune, India (Ensemble Sangeet Prayog) and is about to embark on a collaborative project with indigenous Tao singers on the Pacific island of Lan Yu near Taiwan, sponsored by the Music University of Vienna.

Apart from dispersed works on curated albums of other musicians, Bhagwati has so far published 2 monographic CDs: Dhvani Sutras (2016) with Ensemble Sangeet Prayog Pune and Treatises (2017) with Ensemble Extrakte Berlin. Several CD projects will appear in 2019, such as a multi-album with 5 different complete recordings of his Miyagi Haikus cycle, an electronica album called Iterations in collaboration with Gebrüder Teichmann, a album with an a cappella work sung by the Neue Vocalsolisten Stuttgart Atish-e-Zaban and an live-album called …et je reverrai cette ville étrange, a trans-traditional re-imagining of the eponymous score by Claude Vivier — a live recording of the programme premiered in 2015 at Vivier together with musicians from Montréal such as Kiya Tabassian, Gabriel Dharmoo, Shawn Mativetsky, Reza Abaee, Didem Basar, Guy Pelletier, Navid Navab, Sal Zissokho and Nic Caloia.