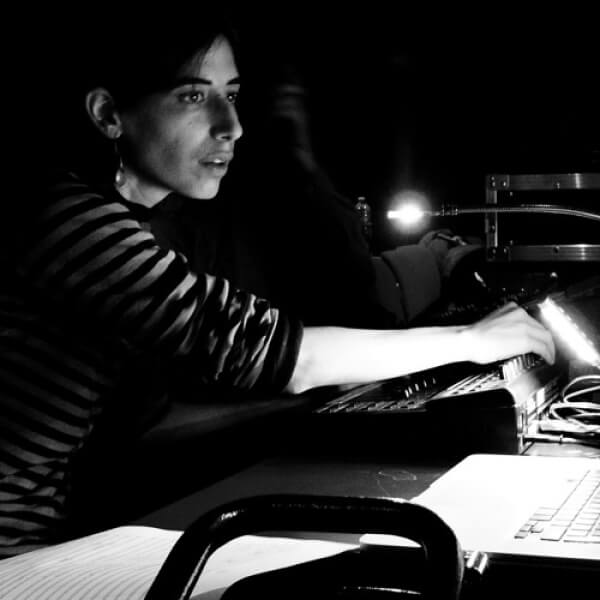 Núria Giménez-Comas began her musical studies with piano, but already with the idea of studying after the composition. She entered the ESMUC (Escola Superior de Musica de Catalunya) and works instrumental and electroacoustic composition with composer Christophe Havel. This work with electroacoustic music changes her way of thinking about instrumental music with a deep reflection on the notion of timbre in music. In ESMUC she finishes the bachelor with Mauricio Sotelo and a dissertation about "Music and Mathematics".
After two years she could enjoy a period of training at the Geneva Conservatory where she studied electroacustic composition with Luis Naon and instrumental with Michael Jarrell especially deepening in harmony and instrumentation. She has finished the Master in Composition at the High School of Music of Geneva with a dissertation about sound perception with Eric Daubresse, and developping some concepts, as "sound image".

Very interested in mixt music she has been selected to do Cursus 1 nad Cursus 2 for composers at IRCAM. During this research year she deals with the  sound scape listening in a project for string quartet and electronics. It has been premiered by Diotima Quartet in a collaboration with Voix Nouvelles de Royaumont using the new spatialisation system in 3D ambisonics.
She has worked in many collaboratif projects as with video-art and live video performance with Canadian artist Dan Browne. Also she has been in a long exchange with the poet Laure Gauthier in a « Poetic-Architecture » large format for actress-singer, choir and electronics piece.

Very attached also to the orchestration, she has worked with orchestras as OCG, Brussels Philarmonic, Geneva Camerata, Orchestra of Cadaqués with conductors as Michel Tabachnik and David Robertson. And has been taking part to the Orchidea Orchestration Project.

She has worked recently in a artistic research residency at IRCAM-ZKM with Marlon Schumacher, "Sculpting Space" about Synthesis textures in 3D space, working on different immersive installations in promenade format.​

She has been awarded in many competitions as the Prize of Colegio de España de Paris-INAEM 2012 and the 1st prize of III Edison-Denisov Competition.

She has given some master-class or conferences about her music and research and about mixt music at Instituto Cervantes (Bordeaux), at Ircam Cursus and at ISCT of Zurich, Hochschule of Stuttgart among others. Very interested in creatif pedagogic projects she has worked in some institutions as the UAB, "Composers in the classroom" and other pedagogic commissions.

She has been invited to take part of competition jurys as Colegio de España de Paris-INAEM, and Young Composers Prize of SGAE, National Music Prize 2018.